A. What was the record number of goals scored by a DUFC player in a season?

B. When was the Allans'-built Primary School on Lammermuir Crescent opened for business? 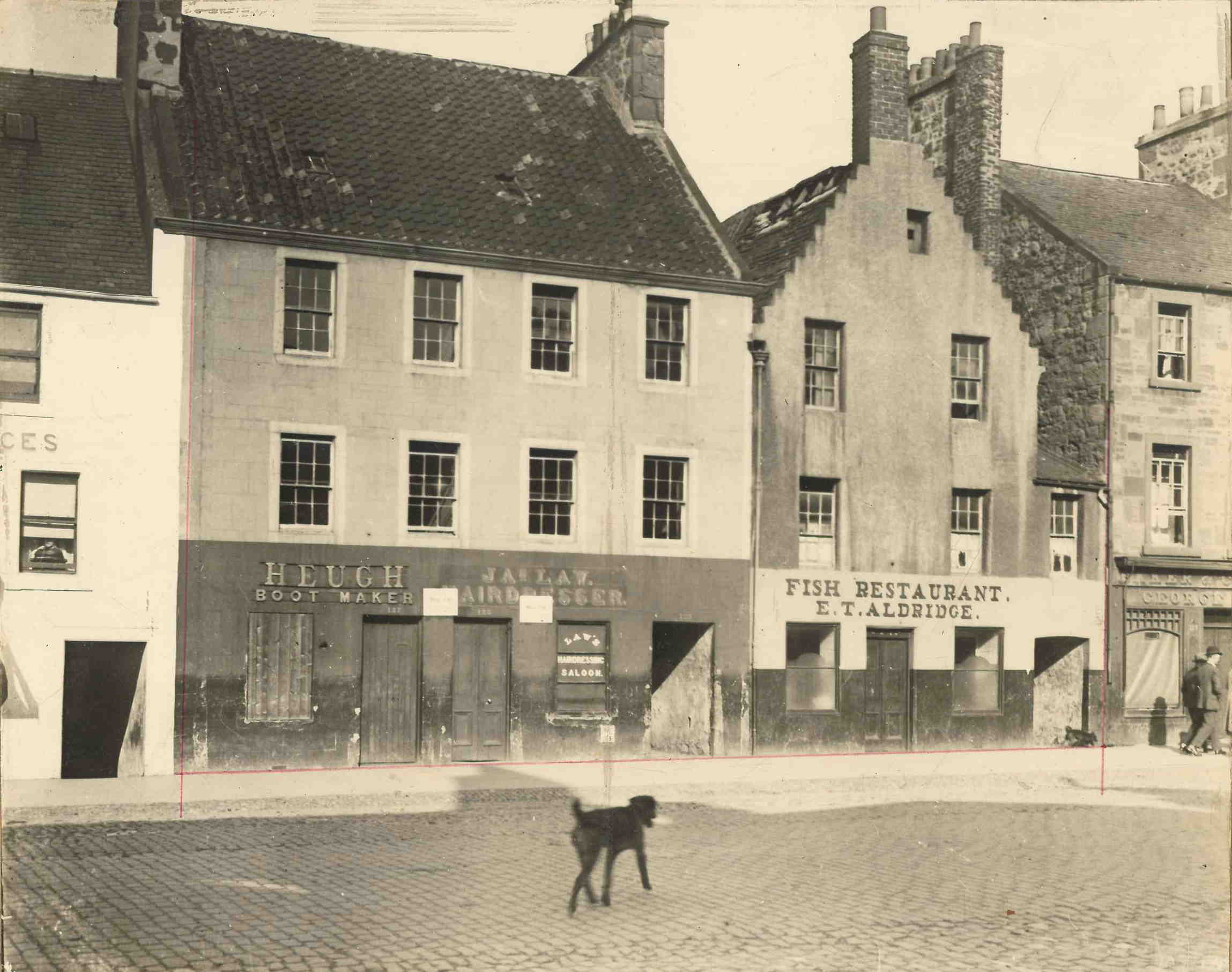 D. Which three of our town’s Closes feature in the above photo of Nos 117 to 129 High St., from the late ex-Burgh Surveyor Duncan Murdoch's portfolio?

E. Who was the Dunbar RFC forward who suffered a broken neck during a 2nd XV match at Winterfield?

A. What was the High Street café pre- and post-WW2 with connections to a West Port tradesman?

a) The West End Café at 35 High Street which succeeded Cruikshanks Confectioners. It was run admirably by sisters Christina Grant and Catherine Main from the 30s to mid-50s. Their brother was David Main, Master Saddler, father of Willie. They lived upstairs, above the café and Peter Heatly, Right Worshipful Master and Hatter, was their neighbour.

B. When, in a manner of speaking, were the following closed down?

a) i) The last official race day here was Thursday 22/03/1906. Some amateur, “yeomanry” races continued for a few years. This closure process was precipitated by the death of 'Major Domo' of Hedderwick racecourse St Clair Cunningham*, of Hedderwick Hill House - son of James Cuthbertson Cunningham and Jane, née McLachlan (he was also the one who was instrumental in the re-founding of the Gowff Course below), who died on Thurday the 19th of April 1906, contracting lobar pneumonia after playing golf in the rain on Gullane Links. He died at March Hall, 16 March Hall Road in the Capital.           *Born October 8th 1857 in Edinburgh.

ii) The Hon. Secretary* advised all that Saturday 01/05/1937 was the date from which the course's upkeep would be discontinued.       *Alan Cunningham at the instruction of his mother Elizabeth S Usher.

C. Where on our broad High Street in Victorian times were the Black Bull and White Horse public houses?

D. Which building in the Dunbar area is described in inventories as:- Late 18th century 2-storey house; harled and pantiled; stone porch?

a) The Thistle Inn by Broxburn.

a) Local man, and son of a former Northern Open Winner Robert, Stuart Martin with a record-breaking score of 58 equivalent to 7 under par. Furthermore, a Ladies course record of 64 was set late last year!

A. What is the connection with the song above and a Moog synthesizer inspired group who appeared here in the early seventies?

a) Giorgio Moroder who co-wrote the above with Phil Oakey was instrumental in creating the song "Son of my father" which topped the pops in Feb '72. Chicory Tip who recorded the song appeared here with some Christmas cheer in Mid-Dec '72 at our harbourside ex-gymnasium, "The Victoria Ballroom"

B. When was Jimmy Forsyth, stalwart at The Railway Hotel/Dolphin for more than a third of a century, born?

a) James Galbraith Forsyth was born a hotelkeeper's son, on 20th December, a Wednesday, at noon in 1911, at the Caledonian Hotel, Fauldhouse. He was the second son of Thomas Forsyth and Annabella Galbraith. Contrary to popular belief he was schooled, much to his chagrin, privately in the West Riding, Yorkshire and oor kilted cavalier made every sassenach pay for it!

C. Where are Dunbar Roads?

a) They are two, bathymetrically shallow/flattish offshore passages running North West to South East, close to shore in "Dale country" between Scoughall and Seacliff.

D. Which public house/drinking den in Victorian times was situated at 88 High Street?

a) The Prince of Wales, which was located at what is now The Pound Shop, ex-Greco’s restaurant and formerly The Doric/Juke Box Cafe.

E. Who renamed Kilahara, a villa on our East Links Road, Tulliallan?

a) Two spinster sisters, the Misses Shields, who moved here around the end of World War II and worked then in the Post Office, named it after this Fife area from where they came.

A. What is the connection with the King/Goffin track above and our Victoria Ballroom?

a) On Saturday April the 4th 1964 a 24-year-old Bermondsey Boy, Jimmy Justice, (born James A B Little) who trod the boards in our former Army Gymnasium, was the main attraction here in Dunbar on that Spring evening. From the Spring through to the Autumn of '62 he had three hits in the Top Twenty and the above was the biggest seller (in Britain). However, he was possibly more successful in Sweden, parts of Europe and Australasia. recording more than 50 songs on Pye; an anthology of those was released on 2CDs in 2001!

B. When was the last case of matricide in our Breezy Burgh?

a) On May 19th 1989 Douglas Parr (43) murdered his 'nagging', widowed mother Beatrice (65), wife of the late Robert. Strangely, he confessed in the Royal British Legion to former Leith Policeman (Sergeant) and ex-Dunbar Constable Charles Ross who instructed Parr to give himself up. He duly did so and in The High Court, Edinburgh, later that year, (31st August) a jury took less than half-an-hour to find Parr guilty and the Judge committed him to a life sentence.

C. Where exactly did this murder take place?

a) In a cottage on the former Common Close, off Castle Street.

D. Which of the following statements about oor toon, meteorologically, is correct?

i) Dunbar is/was the sunniest resort in our Kingdom.

a) There is a very slight possibility it is (i) but a quite definite probability it is (iii). Our town averages just under 1,450 hours of sunshine but averages 22.50 inches of rain per annum.

E. Who was the daughter of Daniel Muir who died in April 1832 and was buried on 6th April in our Parish Kirkyaird - possibly interred with her mother and grandmother (Janet Kennedy) in Lair A214?

a) Jannet, daughter of Muir and his first wife Eleanor “Helen” Weatherley Kennedy of Warenford, Northumberland. Helen (daughter of a William and Janet Kennedy) was born on 28th August 1800 and died in July 1832. Helen’s mother Janet had the Meal shop on the High Street, now John Muir House, and died in February 1829. Helen was buried on 1st August 1832 and earlier she married Daniel Muir at Berwick-upon-Tweed on 7th October 1829.

A. What decision was taken, apropos spending of the monies "gifted" to The Breezy Burgh by Mrs Jane Baird (Hay), by Dunbar Town Council, in the early 1890s?

a) The building of the West Promenade.

B. When were John Aubrey’s Miscellanies, which detailed circumstance unnoticed apropos the Battle of Dunbar by Carlyle, published?

C. Where did the mercenaries who burnt oor toon in 1548, under the orders of the Earl of Shrewsbury, come from?

a) They were Germans from the Holy Roman Empire.

D. Which building in Dunbar did the Government purchase in 1859?

E. Who was the architect who drew up plans, in 1909, to be submitted to the Dean of Guild, for an extension to the west of the Railway Hotel - formerly Black’s Railway Tavern - on Dunbar’s Church Street?

a) John Farquharson of Haddington.

A. What year saw the retirement of Provost Brand?

B. When the Episcopal Church of St. Anne was dedicated in 1890 which structure did it replace?

a) An iron building on Baker's Croft at Westgate.

C. Where, traditionally, was the nearest Mile stane to oor toon's centre, bearing in mind a Lang Scots Mile was nearer 2000 yards?

a) Although there was once a mile stone propinquous to the Thistle Inn by Broxburn, closer to home there was also one on the Edinburgh Road due south of Knockenhair. However, the closest to the town centre was atop what is now Bowmont. 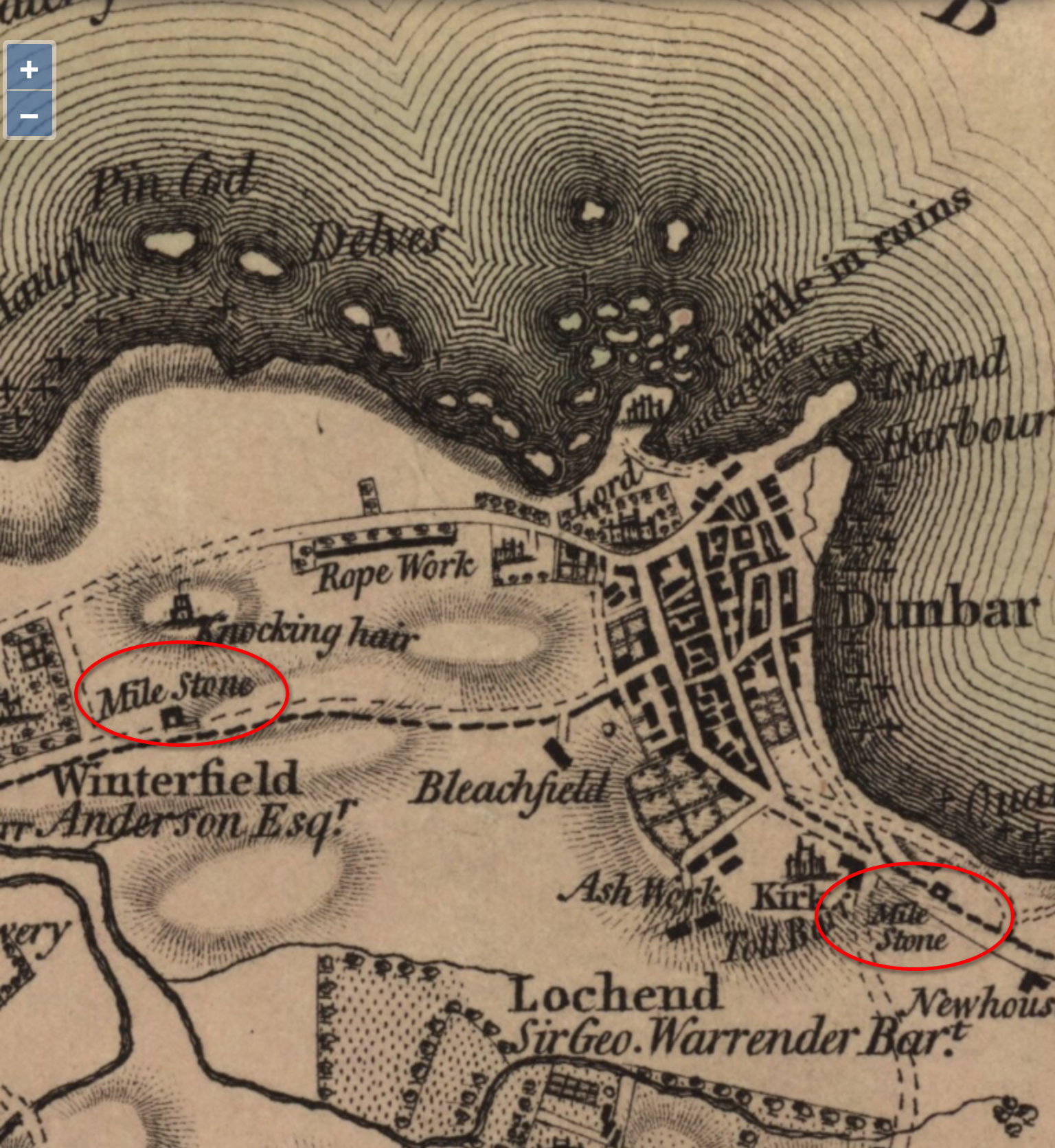 D. Which bungalow on the then New Road (now Countess Road) was called "Craigavon"?

a) Hildaville (#52) now owned by widow Ethel Kelly. It was re-named after Hilda, wife of Erin Deans (of Erinalls fame), the pair were aunt and uncle of Davy Deans, Palace of Pleasure owner from 1956 and sometime Scotland Rugby team squad member. It was originally owned by Arnold Togneri Snr.

E. Who ran the Savoia Cafe?

a) Owned and run by the Greco family it was located at 146 High Street.

A. What was the profession of Joseph Bard Esq. in mid-eighteenth-century Dunbar?

B. When were the Bowmont Tennis Courts on the East Links opened?

C. Where are the lands of Longcroft?

a) Farmed as a 'Market Garden' by Sholto Millar, from WW2 through to the ‘60s, this pocket of land was embraced by Latch Park, Lochend, Harestanes and Underedge (of which some of the latter was utilised) and the Main Railway Line. The aforementioned ground has been developed since the year 2000, creating housing schemes at Salisbury Walk and Bothwell and Retreat Gardens.

D. Which building was described as "Elaborately half-timbered, pargetted and red-tiled?

a) The former Yorke House/Lodge, dating from around 1900 and onetime Cottage Hospital (from 1927). It was monogrammed JHB after John Hutchison Bowe, a potato merchant in Dunbar, b. 13th June 1829, d. 28th October 1900. 12 Bowmont Terrace is similarly monogrammed.

E. Who was the architect for the Edinburgh Road Corporation Houses (Boroughdales) with work starting in 1924/5?

a) George Simpson of Edinburgh.